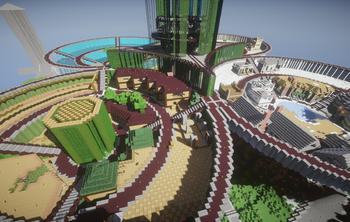 Lothos remained under construction throughout the entire revision. It was located at -1080, -270, following a concentric theme as usual, with incredible tall water walls. At its very center, players would find an End Portal.

The Rail Station had rail connections with Spawn, Angkor and the NW Nether Gate.

During Revision 9, Lothos was built on a Extreme Hills biome at -1500x, -1500z. It was a city inspired by a combination of modern and decayed styles.