Zotshot started off in PvE r5, exploring the world in wonder and leaving behind any thoughts of building a home, preferring to be a sightseeing nomad. However, when r6 came about, Zotshot decided to settle down in a ravine somewhere south of Spawn and built a humble cliffside retreat. Upon hearing about the developments of the town called Pico, Zotshot left his ravine home and set out North (or East depending on who you asked before the cardinal orientations). Zotshot established Zot News Tower near the center of Pico, where he began broadcasting news to its citizens. Since then, he has become greatly involved in the Pico Public Projects, building the Giant Pico Christmas Tree & skating rink, assisting in the creation of the docks, creating the Pico Pillar Park and building Pico Stadium!

In r7 Zotshot established the giant Zot News Tower in Pico once again, adopting his architecture to meet the futuristic theme of the skyscraper city. However, feeling the need to expand his empire, Zotshot began building the Zot Media Tower in New Amsterdam, the New York themed city in the Darco Region, acting as co-mayor with Asvdveen. 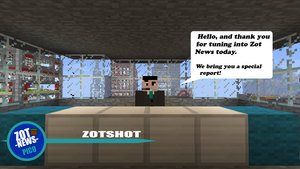 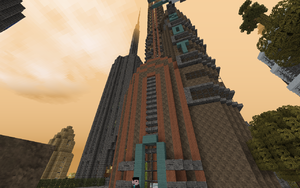