From MC Public Wiki
Jump to navigation Jump to search

Originally created for the 2020 Fundraiser. It now continues... Will it stick around...? 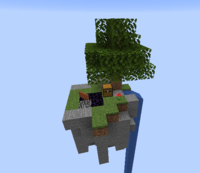