Oasis is a desert city which contains the South East portal in PvE Revision 13.

Oasis features a large stonebrick skyscraper at the center of the city, housing the South East portal. Just northeast of this lie the public farms for plants, animals, and trees. Further to the East is the lake, spanned by a suspension bridge, and featuring a giant tree at the North end of it.

A horse stable on the right of the animal farm (a large red barn) often offers free horses, donkeys and mules, and is making an effort to produce the healthiest pure white horses possible.

The town's nether side, in addition to the usual spawn path/rail, has a path directly to a nearby fortress which holds several blaze spawners.

A subway station, skeleton grinder and other works are under construction. 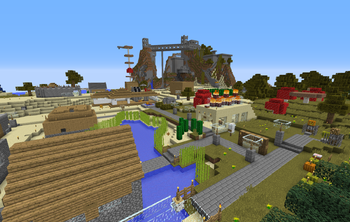 Oasis (r5) had rail connections to the South Central Station.