Unlike for previous versions of Gwenyn, for revision 22 the city was planned prior to revision start and suitable locations were scouted. The location was finally located by slats. Queenbombus and Ullander have built the majority of the structure. 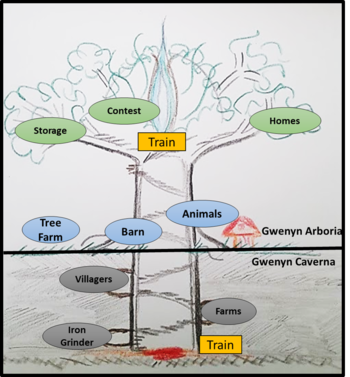 For Rev22 Gwenyn was divided into 2 regions: Gwenyn-caverna (below surface) and Gwenyn-arboria (surface and above). Each region had a train station. Gwenyn improved its villager breeding and trading, and established an iron grinder for the first time.

All participants received a map illustrated by QueenBombus 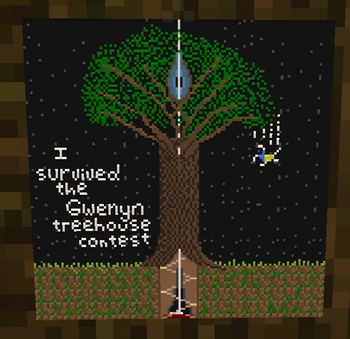 Early in the revision, Ullander mined his way into a large underground fortress which contained a total of six monster spawners: five skeleton and one zombie spawner. This was developed into "Skelly Mart", a double-triple grinder that proved helpful to many players early in the revision. 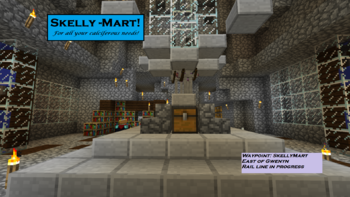 QueenBombus and Ullander settled in the southern seas and built Gwenyn following a seaside theme. The buildings used all the variants of sandstone, primarine and stained glass as their core materials. Gwenyn also had rail connections with Haven.

The 'Danger Noodle' as many called them, was a large serpentine creature spotted in the southern seas before the New Year. Other impacted regions included Gwenyn and Haven. It was deemed extremely dangerous and warnings remained in effect until the end of Revision 21. Brave travelers and adventurers were advised to approach the creature and conduct any interactions with great care. It was also important to keep an extra elytra, a bed location and minecart on hand. If people found themselves inside the dragon (it happened many times), hands had to be kept inside the minecart and it was recommended to avoid rapid movements. Past attempts to steer the minecart resulted in death.

Twenty Minute Brewhaus was a brewery and pub located in Gwenyn. The beers list included Angry Bird Mead, Lava Pool Lager, Barrel Aged Dragon Blood, Porter of Unbreaking and Creeper Head IPA, all of which could be enjoyed at the pub upstairs.

Queenbombus and Ullander produced two paintings for Gwenyn during rev21. The first one was created as a souvenir, the second one as the embodiment of the Christmas spirit.

During this Revision, Gwenyn was a city carved out of mountain. The city gained:

The town was left largely unfinished as QueenBombus had to attend to real-world duties.

The first Gwenyn was a sky city formed by floating circular platforms. The sizes varied as much as their function (from farms to storage buildings).