Halloween Town was an event created by cujobear and King_of_queso.

Continuing with the tradition, Revision 22 saw the creation of the third edition of Halloween Town. This year a small team of builders from all corners of the map joined King_of_queso and cujobear to bring the spookiest town of the server to life. The town was located just north of Vizmosas, with its entrance at 950, -2285, just across the way from the motel.

The event was held on Saturday Oct 27th at 4pm CDT, and the festivities included Trick-or-Treat, Costume Contest and Mini Games such as bobbing for apples, a dunk tank, thimble, pig racing, and much much more.

The community was invited to build houses or decorations for the trick-or-treating event. With that in mind, 19 plots were planned and laid out for players to build that range from 5x5 to 6x6. A set of rules needed to be followed: 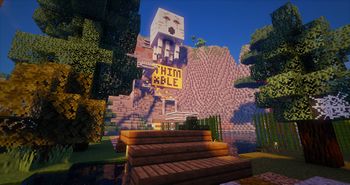 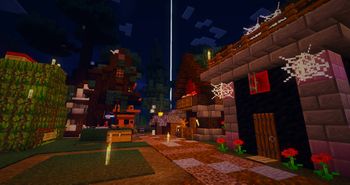 Their second edition was built during Revision 21. It consisted of a party where players were invited to build their own small house or decoration with a dispenser filled with treats, inside marked plots that measured 5x5 or 7x7 blocks. On the night of the event players wore costumes and went trick-or-treating. They also took part in various mini games, from archery to pig racing. The town was located at -3750, 390. 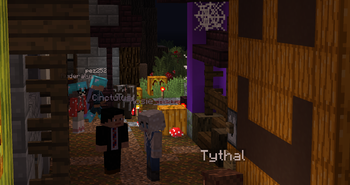 During Revision 18 cujobear joined forces with King_of_queso to creater a player event around Halloween. They started by plotting out an area for a small town in a taiga biome, around 880, -2830 (north of Spawn). Plots were 7x7 blocks and players were invited to build in them. The Halloween party was scheduled to happen on the 29th of October, and it included mini games such as pumpkin picking, bobbing for apples, and more.