Initially modeled on Oblivions town 'Bruma'; a more functional design was produced with the help of peanut's profesional skills. The first public mention of the town was posted on May 14, 2011 on the nerd.nu forums ("New map, new city - Newcastle project"). As soon as the map started, people already involved went to scout out a spot. Land clearing soon ensued, as the objective was to have a flat to contrast the very hilly map generated this revision. More and more people found out about the town through the forum post, and joined in the land clearing efforts. The most notable mountains were the mountain of crushed hope and the mountain of crushed dreams. These were both mountains that hit skybox. The mountain of crushed dreams was so large that a garden now stands in its place as a remembrance of the tears shed taking down that mountain. After the inner city area was completely cleared plots were marked out an given out to people who helped in the land clearing efforts. Chernenkov and ScipioWarrior built the first houses right at the entrance to the inner city. This is when momentum really picked up, with screenshots and stories of the great land clearing efforts floating around. Soon many more people joined the town, and large clearing efforts in Bedrock and the Phoenix district of Newcaslte gained rapid pace. Soon many plots where give out in phoenix, and killmall62 and kittyanya built towers outside of the gates to Newcastle, naming this area the castle district. Newcastle then became the most populated city on the server. (Well, it already was, but at this oint it really became the capital city.) The spleefing arena then went under construction, later establishing the PSL, PvE Spleefing league. (the first tournament was delayed for several reasons, including the Brom spleef arena still being under construction, and by the time it was about to happen the DDoS attacks started.) Newcastle then started regular meetings, discussing both serious and funny topics. All of the meetings were recorded. After the first meeting, work on the turtle district started. In the second meeting, the next district was named the Tiger district. Work never began on this district. Towards the end of the map, Ryouba created the Leviathan district, an underwater district. He was helped by many of the main inner city district members, namely ScipioWarior, as well as some others, mainly Austo43. Soon after the map reset due to switching host because of near-constant DDoS attacks. Newcastle will forever me known as the most Famous and infamous city on PvE.

Construction style is quite specific, if your building does not match, we will help you modify it so it looks right.

These codes represent the exterior facades of buildings ONLY, not the interiors. Interior blocks and spaces are your property to do with what you will.

1. Construction style is quite specific, if your building does not match, we will help you modify it so it looks right. Alterations without permission will take place with 3 days warning.

2. NO BASEMENTS. If you own a plot in the City of Bedrock that is directly above it, you can create a drop shaft, or snow shaft (see Vykoden’s Snow Globe design), provided you are not in a plot along sewer lines.

4. Plot boundaries are an ABSOLUTE. However, it is suggested that to avoid building up against someone else’s walls that you create a setback within your plot to allow for roof overhangs should you choose to use them. Also, setbacks between buildings creates side streets for access to neighborhood courtyards (see below)

5. Neighborhoods- The inner city is organized into 4 neighborhoods that surround the city hall. At the center of each neighborhood is a courtyard that is semi-public space for that neighborhood. The use of the courtyard is at the discretion of that particular neighborhood (this includes all current residents of the neighborhood), but it is suggested that it is grass with an aesthetically pleasing garden. If you have a plot that faces the road and the courtyard, we ask that you design your house so that the facades address both.

6. If you have questions as to whether or not your designs are in code, consult phylet, phillippassmore, or tehpeanut13 for approval. 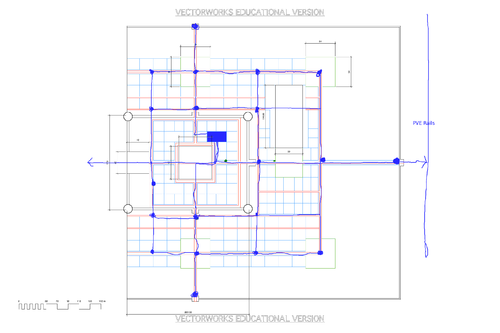 There is an internal Metro network primarily managed by Hoeding with great support from donations from the Community.

Currently there are stops at Eastgate, Newcastle outer gate and Newcastle Castle. Planned are lines that run along the cardinal directions from the center of Newcastle and a loop that is below the outer gate. Any suggestions as to where to expand or where to add stops are welcome.

The rail system is prescribed to try to be at Y=50, however underground lakes have pushed it lower in places. There needs to be room for the Newcastle Sewers above, and the City of Bedrock below.

Feel free to add your own feeder lines to the main system, provided they go do depth immediately and don't interrupt traffic at all on the main line.

Rail connection is being provided by Xavier to PVE Rails at Eastgate.

Phylet directs development of the town.

Ryouba is the Head of the Royal Guard. (HRG)

Hoeding is Chief Grammar Nazi. PS Tehpeanut13: *Chief. (I know it was spelled wrong, phylet wrote it and he doesn't know how to speak English :P)

Cato269 is the Chief Hipster, because he's always so underground, you've probably never heard of him. (In other words, he's pretty much the town miner)

Nvious just kind of helped out sometimes, and is known as the slowest builder ever.

Eearslya is the town redstone advisor.

ScipioWarrior is the leader of the Royal Wolf spleefing team.