The Nuthatch Village was a miniature town founded during Revision 5. Most houses at this village followed the same blueprint (3x4 blocks as the base), and a very minimalistic block palette (mostly oak planks. Some variation would be allowed at the base to give some individuality to each house or to represent a particular functionality or theme (such as the Fluffy House, with white wool at the base, or the Natural House, that used leaves). The very few exceptions that didn't remain as small as the rest of the village were The Big House (5x6 blocks at the base), the Rails Depot (6x7 blocks at the base), and the Buttfuckers Emporium (10x14 blocks at the base).

The Nuthatch Village was very close neighbours with Odenplan, and its known inhabitants are FusionAlch3mist, Ozzy, Phoenix, Spartan and Ryan. 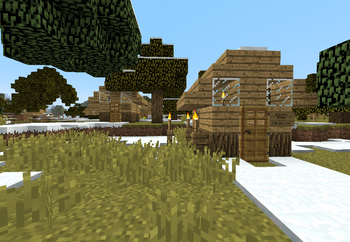