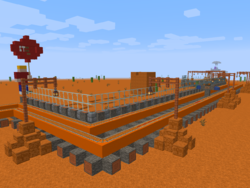 Orange Line is a Creative Transit Authority rail line in the Creative server revision 35. It runs from Yellow Interchange to Speedbuild Station. It is the newest line on the CTA.

The rails on the Orange Line are built from Acacia Wood, Red Sandstone and Orange Concrete.

On one of the corners of the Orange Line a protest against CTA was done. Some guy attempted to stop construction of the line by putting random stuff in it's way. Funnily enough, CTA found a loophole around it.

In case of an attack, to stop the protestors, protest shields have been placed