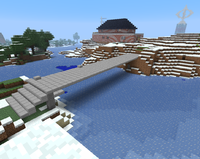 All round hero, probably cooler than you. When he's not being generally awesome, he likes to indulge in a bit of breathtakingly beautiful architecture. The bridge is one of his finest (and arguably one of THE finest) bridges in the history of minecraft.

He helped TheMaas with Candyland, and is known for writing in the third person, which is a bit weird.

Ambigu0us was accepted into Team Britain on revision 6 of the Survival server. He enjoyed several weeks of raiding and battles, but was then unfortunately bitten by the DramaLlama. While recovering from this he decided to have a break from survival and build more trains on Creative.

Some say ambigu0us went mad around reset 13 of the creative server, and from then on the only thing he would build was trains.

His long term plan includes the trains doubling in size every map.

He was banned permanently around the 50th map reset of the creative, when his train was so big no-one else had any room to build anything.

If you need to get in contact with Ambigu0us, there are several ways:

Or just leave a message on his talk page. He spends way to much time on here as well.

But lets face it, there's pretty much no reason need to contact Ambigu0us, unless your relatives were killed in a train wreck or something. But he's more than happy to have a chat, so if you're bored hop on IRC and have a game of ping pong with ChanServ.