WayneByNumbers is a moderator who joined the Reddit servers while Chaos was still up, and moved to Creative when Chaos finally breathed its last. He spends most of his time there, though rumors of his occasional presence on P have surfaced. S, however, causes him to break out in hives and he does his best to avoid it.

His usual skin is Lil' Slugger (kudos if you know who that is), but he has been spotted as Cpt. Picard or Saruman. Annoy him, and he just might disappear briefly and show up wearing your skin.

His strengths include vehicles, redstone, speed-building/demolition.

His weaknesses include architecture, interior design and layout, and collaboration.

Behavior in the Wild

If you see him on C, he's usually willing to chat, answer questions, or help a bit with a build.

If you see him on P, he's probably frustrated with having to actually work for his materials and is less likely to be so personable. Approach with caution.

If you see him on S, kill him.

A parked small airship. Inspired by the abundance of flying ships, but near-total lack of airships on this rev. 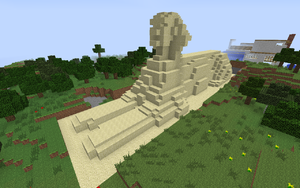 The Great Sphinx of Giza, 1:1 scale. It's smaller than you'd think. 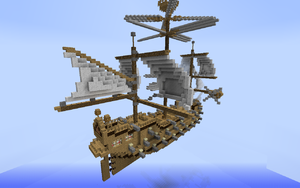 (Pronounced lahsh-YAH-teh) A well-armed galleon-style skyship. The name is Italian for "abandon," as in "Abandon all hope, ye who enter here." 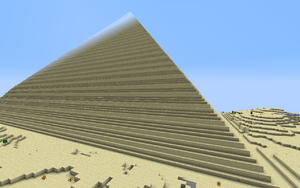 The Pyramid of Giza, 1:1 scale. Also features the interior chambers. 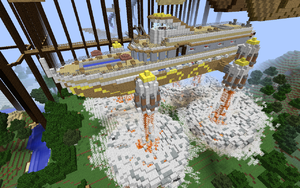 Another skyship, this time a rocket-powered cruise liner. Docked at the flying ship scaffolding built by drickei and populated by dozens of airborne vessels, large and small. 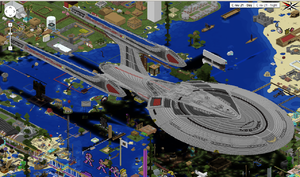