During Revision 2, Spawn consisted of a cozy wood cabin surrounded by a village. The first floor contained a list of rules and commands, a list of admins and moderators, public chests to help new players get started, a fireplace, and a staff only room, also known as ModCave v2.0, which had punchable signs to help moderators complete modreqs, a mod dump and the mod dog (who was later accidentally murdered by yax). The ModCave also had a small top floor that was used as a resting place for the PvE admins, and decorated with a sofa, bookshelves and their portrait drawn on a sign. Following the ladder down, players would reach a cave that lead to MBoffin's On/Off nether portal, and the Cobblestone Generation Unit #436. Spawn's second floor was a rustic lounge decorated with a wooden piano, a giant TV (sadly, the TV remote was lost), a fireplace and sitting areas.

The Spawn Trading Post was located on the Northwestern corner of the Spawn building. It allowed players to trade items by simply punching signs. Some of the trades included glowstone, diamonds, iron, netherrack, soulsand and brown wool. 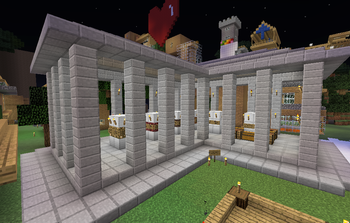 Surrounding Spawn's building, players, admins and moderators joined forces to create a village that would be welcoming to newcomers.