Two Lips (that would later be known as Orion) was a town founded by Riveri, OleToothless and Carnivore_nds during Revision 16. The name is a playful twist of the tulip flower, the icon of the city.

It all began with a lopsided hill which they terraformed into a gorgeous lake-side cliff and put a Plantation house on top. The inner area expanded with numerous utility builds and houses, followed by the build up of the Space Shuttle, Spleef Arena, Germination Station, and Forgotten Castle. A second burst of energy saw the creation of the Two Lips Pig/Horse Track, the Mushroom Kingdoms PvP arena, our villager breeder and shops, and the addition of Doco and his big red house. The final project undertaken by Two Lips was the massive "L'Hotel Lilac", a truly magnificent community project.

The Dairy King Creamery sold locally produced dairy products such as ice cream (flavors available were Ice Queso, Chocovore_nds, OleBluetooth, Riberri and Tulip Cream available), butter shoes, and two varieties of local cheese (Spire Sky-High Reserve, aged 1 year, and Two Lips Cheddar, made with tulip-fed cow's milk). They also offered a selection of imported cheeses (Golden Cheddar, Red Leicester and Gouda), and had a viewing hall for everyone to appreciate and learn more about the process of cheesemaking and cheese ripening.

L'Hotel Lilac sits on a player-made hill with a base 125 blocks by 55 blocks, Built mostly by OleToothless, with assistance on the roof, floors, kitchen, and materials provided by Carnivore_nds. Riveri also helped with flooring and wall construction as well as decorative input. The hotel entrance was gained by the road which snakes through a cave beneath the hill. The hotel embraced Luxury and guest comfort. A full service dining room featuring gold-plated china was available to all guests free-of-charge. The Grand Ballroom hosted nightly performances by the server's best jazz duo under a staggering chandelier, and other attractions could be located through the top notch concierge, M. Gustav, at reception. Upstairs featured a promenade overlooking the ballroom dedicated to all perspective voyeurs. Opposite to it was the Gentlemen's Club and library, a place of leisure for the educated sportsman. On floors 3-5 the suites could be found, including the 4 "presidential" suites which spanned all three floors. 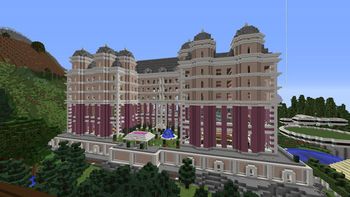 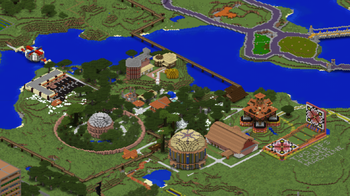 The Two Lips Flower Machine was nominated to the PvE awards best redstone build category. At first it was just a simple redstone machine, but then became a beautiful redstone machine when Kisa and CARnivore helped with building the shell.