Fairlight was a town founded by czqbqymc during Revision 12. The town had simple rules. No derp builds were allowed and the importance of well-lit homes was stressed. Citizens that completed their houses would be rewarded by the state with a horse.

Fairlight had a Town Hall, various farms, grinders, a church, a library, residential areas in different biomes and with different architectural styles, and rail connections to spawn. The town mayor encouraged their citizens to travel by offering travel guides at the library, with the exclusion of Port 80. Traveling to this particular town was deemed extremely unsafe for Fairlight citizens due to ongoing acts of aggression towards the State. It was advised to halt all interactions and communications with Port 80, but by the end of the Revision the political tension experienced by Fairlight didn't seem to be reciprocated by Port 80.

During Revision 15, Fairlight settled at -125, -800 and had two districts, the Akemi District and the Kaname District.

During Revision 22, czqbqymc, now Cizeta8088, established Fairlight South of Spawn (r22) and joined the Federation of Southern Townships, also known as "The Federation". Fairlight was a large town located in the northern reaches of Federation territory. It was located directly along the route of the southern cardinal road and thus many southbound travellers would pass through it every day. The northern border of the Federation runs through the boundary between Fairlight and a municipality that borders it to the north. 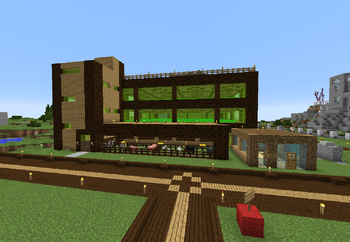