Spawn Manor was the first place a new player would see. It was built by Ooer, with help from many members of PVE.. After reading the list of rules and commands, the list of admins and moderators, the Protections Tutorial, the FAQ and general information about the revision, players could choose to venture out into the world, by using the roads, the rails or by risking going into the nether through the hidden portal.

A map room featuring all major towns and cities could be found on the bottom floor, right next to the Rail Station, as well as the 'Adventurer's Lounge', a hub for all PVE Quests and other events, on the third floor.

The Adventurer's Lounge was located on the third floor of Spawn's Manor, and it featured quests and games such as the Dungle's Quest,the Juggle's Seed, and the famous 5k. A Hall of Fame was created to keep track of all the players who completed the quests. 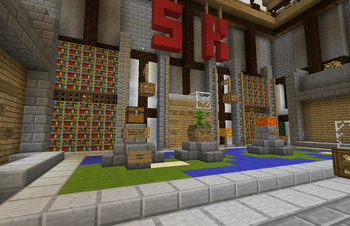 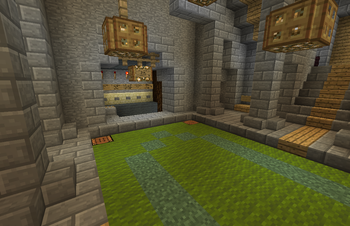