On the revision 3 Survival server, he has lived and built in the cities of Chronum, Arborea, Snoasis and Fort 420; during this revision he additionally was a member of the city council of Chronum, and established the city of Arborea.

On the revision 4 Survival server, schererererer established a secret base in a hollowed mountain, and settled later as a founder of the ill-fated NoName City.

The revision 5 Survival server saw schererererer's involvement in the construction of the BACON base.

Revision 1: Lived in the Redleaf Suburb of New Arborea, designed and led the construction of great feats of engineering including the Arborea-Woodville extension of the North Line, the New Arborea Mobtower, and the New Arborea Coliseum.

Revision 2: Founded the city Abyssus and led the construction of the underwater portion of the city in an homage to SubArborea. Also built the '/i 7 Bar and Nightclub' just north of spawn lodge.

Revision 3: Built a mansion in Ashwater and led the construction of the hanging city of Stalactite, though left uncompleted due to an unexpected map reset.

Revision 6: Created most spawn buildings, exploring a new field of historical Asian architecture in the process. He also built the Imperial Bank and freight rail systems as a member of Pleasantville and led the design and construction of the Überproject.

Revision 8: Returned to Darco as a contributor to various projects.

Revision 9: Built a number of structures in Brom, including 3 skyscrapers, a police station, donut shop, football stadium / art museum, trailer park with tornado, and around 8 buildings on the western waterfront of various types. During this time, he also took on some assistant mayoral duties.

Revision 11: Suggested shift to core team of high-quality dense city building and suggested name of Shady Oaks Retirement Labyrinth. Mayored Shady Oaks (Brom under a different name) and built many things there, in particular the art museum. Also contributed a lot to the design of the spawn spaceship Unity.

Revision 14: Mayored Bromspring Islands, a set of 95% artificial islands built around the NW portal. Built the Brom Museum of Art and Architecture, Chesthaus, Lionstone Island, BromIT Datacenter, and several other buildings. Also did some work with rail and aesthetic farms.

Revision 18: Mayored Brom and established a close collaboration with Pico, with both cities running an Asian theme. Built the Orange Fort in quasi-Mughal architectural style, and a series of nearby buildings.

Revision 19: Fully merged the Brom Diaspora with Pico and laid the beginnings of a conspiracy to overthrow the Piconian government from within. Built the White Cloisters Art Museum and Cathedral, and the Pico Ducal Stables. 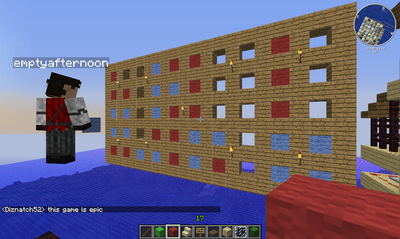 A ferocious game of connect four

Revision 24: Built an oversized organ. No, not that kind.

Revision 25: Half-completed a Brom Tower right next to spawn. Still feel bad about that.

Revision 27: Built an oversized grandfather clock, a spiritual successor to the organ.

Revision 30: Built an oversized chandelier, third in the series of gigantic luxury furniture.

Revision 31: Won second place in the 2016 lobby contest with a collection of quartz buildings mounted upon floating prismarine islands.

Confusion is often expressed as to the pronunciation and duration of schererererer's name. There are 5 sets of 'er' total, and the pronunciation is similar to 'share-er-er-er-er' (even though the Mumble lady says Shur-er).

Schererererer enjoys constructing crazy things with lego, eating moose tracks, chocolate, and Reeses' peanut butter ice creams, and drinking copious volumes of root beer. He was also formerly in geosynchronous orbit about the earth, cleaning up debris in the spirit of community service; because of this, his audio quality was less than desirable. More recently, he has been stranded on the moon, further degrading his transmission integrity. Also, his microphone sucks.

Imagine the sound of ten metric tons of gravel being poured into a swimming pool filled with broken glass and chalk with 'eye of the tiger' being played at 8x speed in the background. This is roughly the quality of Scherer's mic.