Kedland was first built by KedNys on the Creative server, where it saw six different versions. The seventh version took place in PvE, Revision 16, adding a new angle to its history.

Kedland had its debut in PvE during Revision 16. KedNys went Southwest and founded the town not too far from Spawn. With the help of Tichan and Heaarty, Kedland had very robust and impressive structures such as the Kedland Tower, the rail station and the Kedland Sign. It also had good road connections with other settlements, particularly Rose, where they built an Embassy.

Kedland was visited by jeb_ in October 2015.

One of the structures that intrigued other players the most was a fake nether portal built with obsidian and purple wool at the center of the city. Many would report seeing an active portal when in fact it was just a trick. Ironically, during the Zombie Apocalypse it ended up being accidentally lit by lightning and for a few hours it was the only functional portal by the end of the Revision. 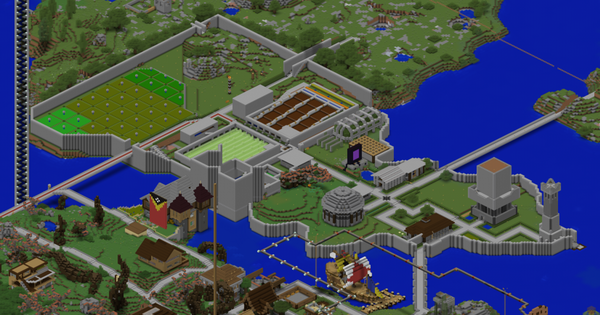 Carto view of Kedland during Revision 21
Retrieved from "https://wiki.nerd.nu/index.php?title=Kedland&oldid=28704"
Categories: