CutterWill joined the PvE server in rev 4 but he stopped after some time. In rev 7 he came back to build a roller coaster called Creepers Revenge. Later, it got shipped to Bromland and became a popular ride. He didnt play in rev 8 but came back in rev 9. He built Beachland Amusemnt Park with 5 roller coasters and 2 flat rides. In rev 10 he joined TECP in Nova and built Xtreme Heights Amusement Park and made a video of it. In rev 11 he started a city-state named Tellico.

In Revision 12, CutterWill took on making the Santa Maria del Fiore in the giant alliance of Brom, Seneca, Endor and a few others. He built the cathedral in the outskirts of the claimed area; and over the rev, he slowly built it. CutterWill says that he got caught up in stuff outside of Minecraft and was unable to finish it during this Revision, but he promised himself he would built it again. And that opportunity came during Revision 21! By November, CutterWill was ready to begin what was later known as his last project for the server. He started to design the Santa Maria del Fiore cathedral again and eventually got a schematic of the building. He cleared an area aroun 650, -1530 and began the construction on November 11th. Over the next two weeks he got most of the exterior done. CutterWill still had to design the dome of it and before the new year, he was able to finish it. The interior still needed some work, so he slowly got the aisle done with little time left. During the zombie apocalypse, he lit the entire cathedral up to stop the spawning of zombies, just so he could work on it. Despite all the danger, he was able to get the interior of the dome, most of the bays and almost all of the floor done before the cathedral was blown up by TNT during chaos. 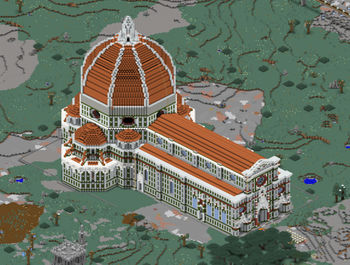 Tellico is a nation inspired by Darco, and area comprising various mega projects and towns that collaborate. Tellico was started by CutterWill during Revision 11. 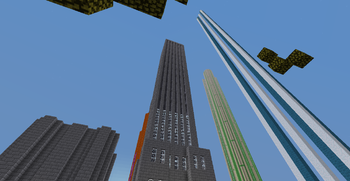 Rides at the Amusement Park in Bromland

Back in Revision 7, all CutterWill wanted to build were amusement parks and amusement parks only. He built one coaster outside of his house, but when he heard that thelethalkind was making an amusement park in Bromland, he moved and built more rides there. Over the course of the rev, he built more and more rides until the park was full of his and other people’s creations. 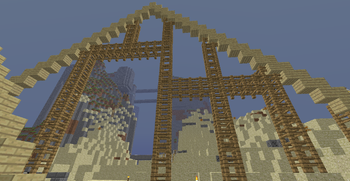 CutterWill introduced to the PvE community a new game called Run the Gauntlet. The first arena was built in Avalon, and later that rev it made a mayor appearance during the PvE Olympics. The game rules were simple. One team, of 5 people maximum, had to run back and forth on the bridge, while another team tried to knock them off by shooting arrows at them. Each time a player crossed the bridge, a point would be added to their score. When all the players of one team are knocked off, the teams would switch places.