This revision Spawn consisted of a extremely detailed hollow building that gave enormous priority to the cardinal roads with big letters, built with blue wool, making each direction very clear. The only mention of rules was a single sign that encouraged players to visit the server's website for more information. Spawn's Nether Portal was located right in the center of the Spawn building, and under players could find the Spawn Rail Station with connections to Seneca, the West Portal, the PvP arena, Nuthatch Village, Oasis, Odenplan, Feld, Brom (which was the biggest town on the server this rev), Eastgate, Pico, Brom's Airfree district and CityMaybe.

If you've downloaded this map from nerd.nu/backups, the first thing you will notice is that you seem to have spawned in a pool of lava and are now probably dead. Yes, you've kicked the bucket. Shuffled off your mortal coil. Bereft of life. Pining for the fjords.

Not to worry; the individuals responsible for this trap have been sacked. 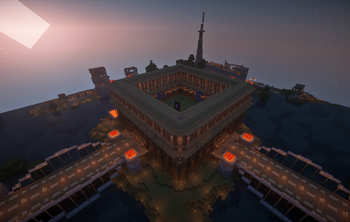