The Creative Transit Authority refers to a server-wide project to connect the Creative server via booster-powered minecart rails. It serves the purpose of an easy transport/sight-seeing system. It was founded on Creative Revision 11 by Goron40, LadyCailin, tbone510, and DJZG and has been present on every server revision since then, as well as making a short intrustion onto Survival Revision 5.

The CTA has 2 modes of transport. There are trains and elytras. For elytras, there are special stations called elytraports. They have water that blasts you up to fly and landing stations.

With the incomplete CTA last rev, the CTA got a head start and is expanding quickly. Revision 35 started with a pre-made spawn station directly underneath spawn.

Revision 34 started with the Spawn Station underneath spawn, where all lines connected. The Red line goes towards Downtown, Yellow To Kornith, and Green to Ya Ok Island. The Blue line currently goes nowhere. There is going to be a Light Blue Line, but it is being planned.

Revision 33 started with a pre-made spawn station next to the main spawn building, where all four cardinal routes connected there. All lines consisted of the Yellow/North Line, The Red/South Line, the Blue/West Line, and the Green/East Line.

The cardinal lines are currently under active construction.

Following the incomplete CTA from Revision 26, the Creative Transit Authority found new life, and with it new guidelines. Employees*

*List may not reflect all contributions to the CTA 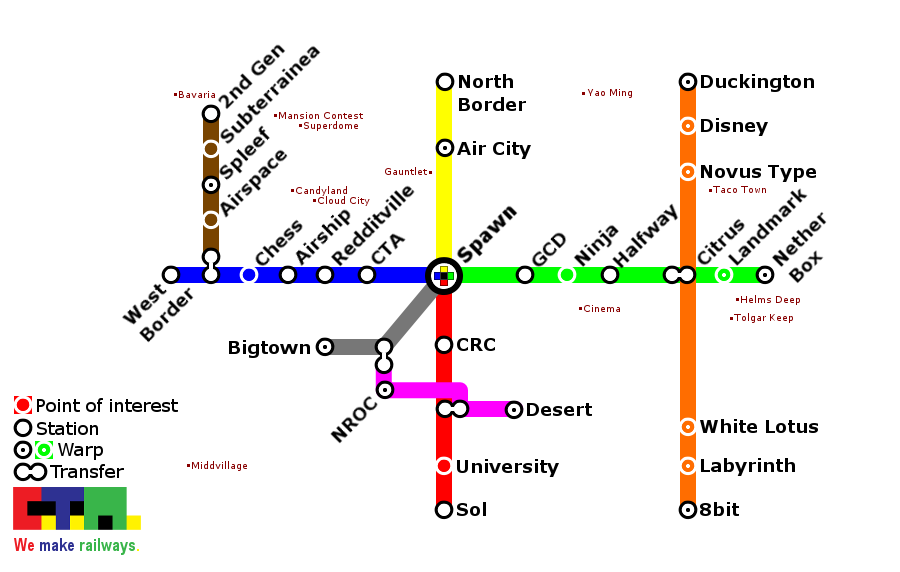 With the exception of major intersections or special stations, all subway stations should follow the following layout.

If you create a line, and would like it to become a part of the officially maintained CTA rail line, please ask any online CTA employees and mark where the line is going to go thru and where the station is going to go thru. Your line will be reviewed to ensure that it meets our standards, and you will be assigned a color and then be included in our rail system. For realtime information about construction projects, please go to the CTA HQ visitor center.

Please do NOT create stations without CTA approval.

Tracks should consist of entirely powered rail, and as a result, should have a concealed redstone torch every 17 blocks. Any elevated rails must have structural supports.

If two lines intersect, there should be an intersection station for players to transfer. If three or more lines intersect (or if the intersection is a significant landmark like the spawn), the station should be a hub station with multiple lines and platforms running through the same building. Make them epic.

(Please note that the following is sarcasm and not intended to be taken seriously).

The CTA, after a class action lawsuit from all users on Creative, has declared bankruptcy. Other contributing factors to the financial demise of this great organization include fraud, corruption, derp, and mismanagement.

And more proof of the corruption in the CTA and a possible bailout from the head admins:

As of Creative Revision 17, the CTA has received a moderator bailout, and is once again running under the leadership of Goron40.