Hyrule is a town that was founded in PvE Rev 11 by gk_ryo.

The usual designs tend to involve water either as a design element or a means of transportation and, as the name suggests, likely involving video gaming with a focus on Zelda locations. 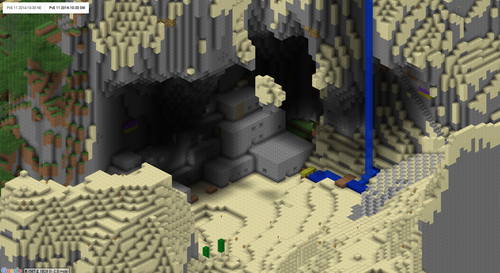 Hyrule, originally named Southaven, was founded in the northern most part of the map. Created first was the build in the back based off of the Gerudo Fortress from Zelda's Ocarina Of Time. At the peak was the unfinished build of a Pokemon Center. It was dubbed Hyrule after the rev ended.

The "easiest" means of getting to it was by climbing halfway up the Whiteoak mountain past the Dalek and using a rail at another player's sheep farm. 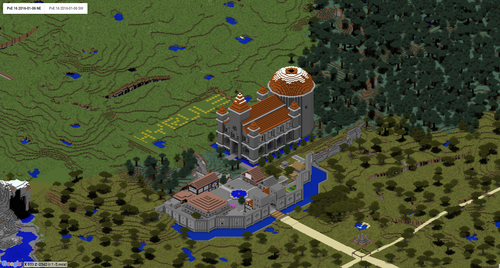 After a two year break from Minecraft, gk_ryo used the same strategy as last time and looked to the edges of the map. Indigo Base was setup as a temporary base at the end of one of the rails while gathering resources and clearing land for what would be the main build.

The main build was based off of the Temple of Time and Hyrule Marketplace from Zelda's Ocarina Of Time. It featured a snow spleef arena, a villager marketplace, and CARTS system going to Solace and Long Lake, as well as clear across the map. gk_ryo fell to his death in the construction of the build 63 times.

After helping Solace get to The End, Hyrule claimed one of the other End Portals. gk_ryo helped as well in training villagers and some construction in The End. The main build was left incomplete after broken promises regarding construction of a redstone clock and discouragement from RL issues.

The main build was based off of Clock Town from Zelda's Majora's Mask. It featured rails going to each edge of the map, a not-to-code spleef arena, and a cow factory. Other rail connections were made to Solace, Port Aperture, Two Lips, Rose City, and to the Slime spawn of Pico.

Indigo Base was setup at the volcano.

After coming back, gk_ryo used carto to look for areas that had been the victim of pit mining and found one near the SouthEast Nether portal. Unlike other revs, he didn't have anything game related planned out for his main build and instead started working on a giant 128x128x128 pumpkin (with jack-o-lantern donations from Rose City.) There is a small memorial to his dad east of the pumpkin.

After finishing up the pumpkin and base, gk_ryo also contributed buildings to Halloween Town and created two of the challenges for NightOak, the snow golem and the dragon.

The plan for rev 19 was to build an island from Wind Waker. After abandoning Indigo Base in the NE for Auratus to make the guardian farm, sufficient space was found between Pico and Arrik with no visible neighbors at the time. The first two weeks were spent constructing the spleef arena, traditional areas, the usual initial rail to Solace, tunnels to Pico, Arrik, and Auratus, and a completed Pokemon Center (only took three years) based off of Sun/Moon design. Work immediately after went into destroying the east part of the island for resources and space for the main design build of the rev. Dragon Roost Island was chosen over Windfall Island due to Windfall's lack of 90* angles in design layout.

A museum was made on the west section that included all past Hyrule banner designs and map art.

gk_ryo was the first to visit the hell biome.

The plans for rev 20 were discarded upon finding the floating islands in the sky. After claiming the large plot, something was done that hadn't been done for Hyrule before: including others in the build. User Australican decided on a infrastructure for Hyrule, allowing gk_ryo to gather resources and work on the various large builds for Hyrule.

Hyrule functioned as the major rail hub of the NW, with lines going to the various surrounding communities and even all the way back to the center of the map.

Features in this build included a PvP arena based off of Elder Scrolls IV: Oblivion, map art museum, the usual banner history, iron farm with a fun AFK mechanic, massive auto-crop farms, Hyrule's first villager mart, and a functioning Settlers of Catan board. Small plots were set aside for other users to build their homes away from home.

A nearby water temple was excavated in hopes of using guardian spawns for an arena, but they unfortunately did not. The pop culture build for the rev was a quidditch arena to be used for some water PvP fighting. Hyrule scaled way back on the usual amount of rails and only had lines to Pico and Moonshine Bay.

After mapping out the southern half of the map, Hyrule's placement for the rev had too many options. All of those options were quickly discarded after user Fazaden found the first additional nether portal location and turned it over to Hyrule. The max size for a portal this rev was smaller than in previous revs, so the design chosen was for a buried TARDIS.

Featured were rails to Solace, the Federation of Southern Townships end portal, and Ambrosia. Nether Portal roads went to Solace, Pico, and Kirik portals. Iron and cactus farms were available for visitors.

The main design was of Gerudo Town from Breath Of The Wild. The nether design was a flipped Dark World version of the main build.

Indigo Base was established in the far west. 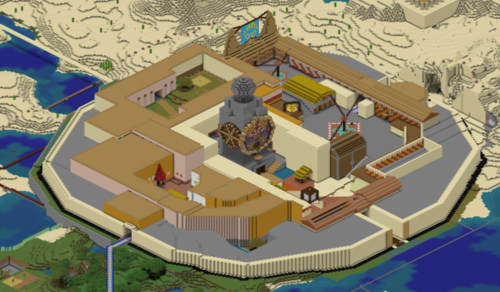 Featured were rails to Haven, Orion, Darkroot, spawn, and the SE End Portal. Iron, cactus, and cane farms were available for visitors.

The main design was of Clock Town from Majora's Mask, a redesign of Rev 17 since it was incomplete.

With it being wide open as it was in the game, the city was filled with posing stands of members of the community, pulling mostly from those who were active that rev. While some of the members synced up to characters in the game, a lot of it was just filling spots needed or filling active requests of others.

The clock tower did have a redstone design weaving through it that would launch fireworks and then launch TNT, blowing up sections of the build.

Bamboo, iron, and cactus farms were available for visitors.

The main design was of the Marketplace, Temple of Time and Ganon's Castle from Ocarina of Time, an expanded design of Rev 16 at Silversunset's request.

Indigo Base was established halfway between Rose's End and Nether portals at -900, 1800.

With the large amount of room available, parts of Hyrule from previous revs were included or updated in rev 24, including: