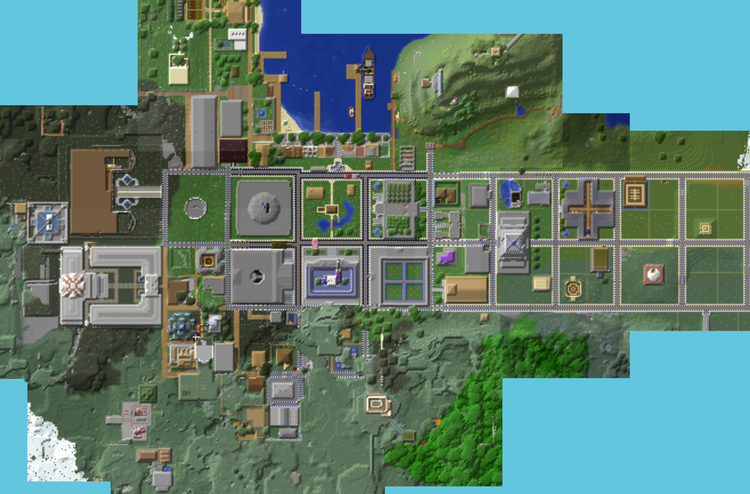 Map of the city, current as of January 13, 2013. (South Seneca is obscured under floating landmasses.)

The Spirit of Seneca

The City of Seneca has grown from a derelict camp into one of the largest communities on the PvE server. It was not started with any specific mission in mind, but came to embody certain defining principles, including:

The original Seneca was created from the remains of the Brom Township camp of PvE revision 4. Legend has it that WaterSlide, the last to depart the camp on the long walk to the new Brom, presented Chow_D with the keys to the city that was to become Seneca.

Through the hard work and dedication of Chow_D and the residents of Seneca, it became a flourishing town within sight of the mobile spawn baloons of PvE 4.

Pictures from Seneca on Revision 4

Only a couple of weeks before the map was to be reset, a huge techinical issue caused large parts of the map data to become corrupt. The original Seneca was not spared from the great dataclysm, and was lost forever.

In the aftermath, the residents rallied to the cause, quickly replacing what had been lost with a vibrant new settlement that included a memorial tower, a wheat farm, public food chests, a chicken coop ("The Great Pit of Chicken"), a park, a suggestion board for the new Seneca, and many private buildings. Cake was a popular food during this time.

The Rev5 version of Seneca grew organically from a coalition of PvE residents immediately after the server became live for the fifth revision of PvE. As Rev 5 began, a collection of Senecans gathered at the east edge of spawn, and set out into the darkness. Braving the zombies and skeletons of the new swamp biome, they blazed a trail some 300 blocks into the wilderness, and at a flat open stretch of ground created the crossroads around which New New Seneca was built. The proximity to spawn caused the town to explode in size. The version of Minecraft associated with Rev 5 was notorious for Endermen run amok, and the Senecan Task Force scrambled to constantly repair buildings. This rev would also see the birth of the Senecan Free Navy, as UNC_Samurai commissioned the city's one and only battleship.

Under the leadership of UNC_Samurai, a wide road was built from the eastern spawn bridge up to and past a replica of the Seneca Memorial Tower. Known as the East Road, and Main Street in Seneca proper, it was from this base that the City of Seneca grew.

The city included multiple skyscrapers, an excellent red brick town hall, two parks, a public cane/wheat/melon farm, a bakery that dispensed free bread, a jail for all the creepers, a public mine, and many private dwellings. The city also included a population of 78 (and counting) residents, and a community of generous people that would have loved to invite you in for dinner. Due to the proximity of spawn, a Greater Seneca Area sprung up around the city, with many residences outside of Seneca proper.

The Age of Terraforming: Seneca in Rev6

When Rev 6 began, the core Senecans again ventured into the wilderness, this time north, to a stretch of open ground around a small lake. Adjacent to this lake was the town square, the nexus of civic buildings. As the town grew in size and was limited by spawn-centric development, the mayors and task force engineered a massive terraforming project to level several hills and use that dirt to lay out large plots over open water. On this land was built Downtown Seneca, home to the town's skyscrapers and spleef Arena. The Seneca Stingrays were a strong force in the rev's preseason, though as the regular season progressed the team stagnated.

Exodus from Spawn: Seneca in Rev7

For Rev 7, Seneca's leadership agreed upon a radical departure from previous policy; the city would locate itself some distance from spawn, to enable better control over city development. After initially setting up a base camp at the south nether portal, then attempting to locate in a large forest, Senecan explorers found an ideal location in a snow biome valley. Despite losing the ability to use minecarts for some time, the city moved forward with its core builders and a handful of adventurous newcomers, the city carefully laid out its road network and used the central park area as a camp. Civic infrastructure and municipal buildings took precedence over private houses. Once resources were gathered, roads laid out, and core buildings such as farms and sheep pens were built, the mayors carefully laid out the initial residence areas.

The Age of Alliances: Seneca In Revision 8

In Rev 8, Seneca joined with the Darco region and Pico to create the Southeast Co-prosperity Region. Built around the dual themes of Colonial Seneca and Art Deco Seneca, Rev 8 Seneca accidentally found itself twinned with Pico, each on either side of a great mountain. Located in the border between a plain and a desert biome, Rev 8 Seneca was the furthest Seneca had ever been away from spawn, continuing the trend set forth in Rev 7.

The Era of Turmoil and Rebirth: Seneca In Revision 9

Revision 9 Seneca marked the beginning of an era of resurgence. Starting early in the revision, Senecan leadership founded a new city at the Southwest Portal, starting an era of Seneca as a portal focused superpower. Built overlooking the sea, Rev 9 Seneca became famous for its beautiful harbor bridge, but also became notorious for creating the Molderp.

Revision 9 was a time of great change and turmoil for Seneca; great tragedy resulted in the departure of UNC_samurai as mayor, but great rejoicing was had as well with the arrival of new mayors such as diznatch52. Also during this period, a number of famous Senecans arrived from abroad, such as avi_dangerstein and mattman00000, who would go on to become mayors as well, and further rejoicing was had when a hero of old, gdavison, returned to once again help lead Seneca.

While Seneca ended Rev 9 as a growing empire in transition, in the subsequent Rev 10 Seneca would rise to once again become a true superpower of PvE.

Rise of an Empire: Seneca In Revision 10

After a heated dispute over portal ownership with those pinko commies from Bromgoth in the dawning moments of the revision, the valiant Senecans opened their hearts in earnest prayer to the great and benevolent Admins. Lo, in a miraculous and awe-inspiring moment of aboose that will long be whispered of with reverence, the Great Portal was moved from the shores of the sea to rest peacefully on the land now known as Portal Park. With a renewed spirit, the humble and industrious Senecans began working earnestly on the foundations for Mighty Seneca.

In tribute to the magnanimous act of aboose witnessed by the early Senecans, the hallowed land surrounding the Great Portal was set aside as a place of solemn contemplation and inspirational signage. Work began on the great public monuments of Seneca, the great farm and spleef arena. Foundations were laid for the great town hall and the monument to the wise forebears of Seneca who built a mighty empire in the time before the great migration from Rev9. Roads were paved. Houses were erected. Animals were corralled. Rails were laid. Signs procreated shamelessly. Seekirt forward operating northeast bases near Bromgoth were established. Mighty Seneca was born anew!

Seneca's great center of recreation. Designed by Avi_Dangerstein, the arena features two floors from which to view games, luxurious players' areas, a state-of-the-art scoreboard designed by RAD Industries, and a players' club which can be found with a little effort.

This beautiful monument to neoclassical agriculture was designed by the honorable Diznatch52, mayor of Mighty Seneca. The extensive facilities contained within this architectural wonder are available for make benefit of all Senecans, and ensure that all Senecans are adequately fed and have ample building resources of a wooden nature.