From MC Public Wiki
(Redirected from PvE Spawn Revision 8)
Jump to: navigation, search
"Warning! If you do not read the rules, the water below will vanish after you jump. Read the rules!"
―Sign emphasizing the importance of reading the rules

Players spawned inside a floating platform in the center of organic giant tree structure, conceptualised and built by the server admins, with the help of the moderators. This floating area contained the list of rules and commands, the list of admins and moderators, the Protections Tutorial, the FAQ and general information about the revision. From there, players had to jump down into a pool of water that placed them at the bottom of the Spawn area. This area featured the Adventurers Lounge, with the Map Room and the Trophy Wall, Spawn's Nether Portal and Rail Station, and public farms. 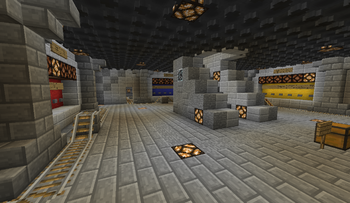