Bromspring Islands, commonly referred to as Brom, is the Revision 14 edition of the Brom franchise. Placed on a highly artificial island paradise, Bromspring is your hub for insane builders and high (amounts of) steaks. Brom is known yet again for its policy of typically rejecting the use of plots, favoring a more random pattern of growth.

The rail station at the center of Brom is the hub of travel for the local region; it has connections to major cities via CARTS and CARBON, yet is able to do it in style. Our rail station, as usual, is quite large and very design-conscious. Feel free to take a ride over to the next island paradise - we'd love your company.

Brom Museum of Art and Architecture

The Museum of Art and Architecture was built by schererererer and had WaterSlide, thelethalkind and nealsmith as benefactors. 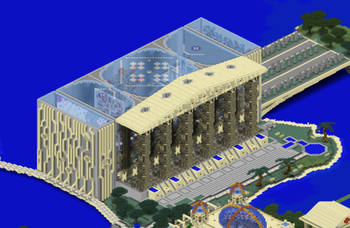 This guidebook was written by schererererer and will generally proceed from left to right through the galleries. Special thanks to our most generous benefactors: WaterSlide, thelethalkind, nealsmith.

Our tours begin with the grand Rose Window centered on the rear face of the main hall. This carefully constructed union of stone and glass has a long and storied history, well over three hundred fifty years in the making. The design of this rose window was first drafted in 1193 for a planned Cathedral of Broddekass, but religious turmoil and the resulting wars ended the project before the foundation had even been set. The blueprints for the frame languished in a monastery archive for fifty years, while the notes of the anonymous architect who penned the first design passed from collector to collector across the continent. These notes held the only record of the original color scheme and glass composition and were higly valued by art historians as an item of cultural significance even before the construction of the rose window. In 1244, the young drafter Charles Ruen stole these valuable notes from their most recent scquirer, the architect Jean Masei. Ruen spent the next year tracking down the blueprints to the aforementioned monastery, and in a mere thirteen years managed to build up a stone masonry and architecture firm and construct in secret the famed rose window of Broddekass. Ruen's astonishing rise to prominence was entwined with the story of the rose window - indeed his name is now synonymous with the singular aperture. Despite his new-found fame, Ruen found much difficulty in integrating the window into a structure for display to the public. Many would -be exhibitors were daunted by the sheer size of the vivid fenestra and the long-term care required to maintain such a mass of stained glass. The original prospective buyer, the Shady Oaks Museum of Modern Art reneged on the agreement, and a furious Ruen attempted to organize an artists' boycott of the museum. This measure failed and Ruen lost much of the esteem he had garnered among his contemporaries. The window remained in storage through an ill-conceived attempt to install it in Rose City late in Ruen's life - his final failure here resulted in a feud with the city council until his death in 1291.

In 1493 the Cultural Advisory Committee of Braum purchased Ruen's workshop and with it the rose window, intending to feature it as the grand centerpiece of a new art museum. However, funding fell through after the sale and the window again returned to storage, albeit with a round of restoration after centuries of neglect. In 1552, the window was finally displayed to the public here, at the Bromspring Museum of Art and Architecture. The exhibition was a huge success, drawing 1.8 million visitors in its first year, and has remained a staple of the Bromulan cultural identity ever since. 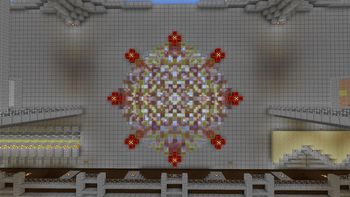 Novel technique and pointed social criticism ally in Frank Carson's Compress. In this late work, Carson employs an unusual mixture of glues and resins to invisibly suspend several tons of sand above light and stone striation. Through this duality of undulating beach and stratified artifice he poses a question and a challenge to contemporary society, critiquing the feeble attempts to evade the stresses of modern life. 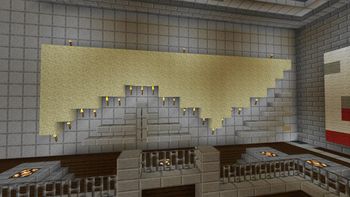 The work of Charles Roche is enigmatic and often the subject of what the artist refers to as "categorical projection", a willing of context into being. Roche is notably taciturn on matters of interpretation, but Aspygmatic has acquired a context that has strenghtened over the years to a memetic point of exemplifying the notion of "categorical projection". The image is widely regarded as a view of blood densely spilt over trodden snow, imagery near universally associated with the Brom-Argoth War of 1192, a vicious winter conflict that nigh annihilated the twin capitals and decimated a generation. 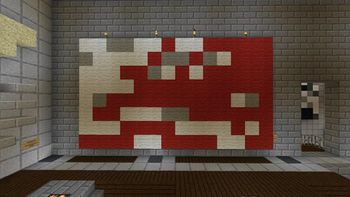 Edward Grieg was a prolific painter of abstract scenes, best known for his desconstructions of unfocused landscapes. His early experiments in streaked color, such as Untitled IV and Untitled IX, allowed for development of the technique eventually employed in his more famous works. The streaking of perpendicular bands was accomplished through both heavy, violent brushstrokes and delayed gravity pull on the thick, extremely slow-drying paint in the vein of Benjamin Raus. The Siglo series of wall mounted sculpture offers a view of the future through the mind of Maria de las Polas. From the dawn of industry, through contortion and disturbance, to a balanced and vibrant future, de las Polas shares a vision of promise achieved through an epic struggle. 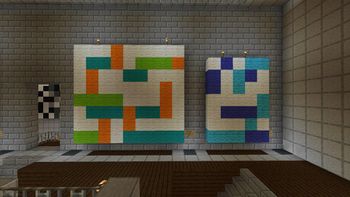 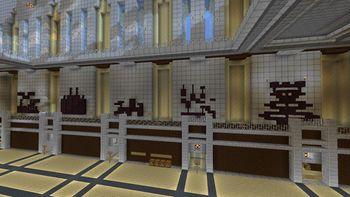 The Villa Chiano interprets the traditional carved hedges of CHianera, the brithplace of the Comtessa D'Alba. These hedges combine local flora with handcarved woods, often built over generations, and have been a regional symbol for over 300 years. The Comtessa's extension of the carved hedge subverts typical notions of symmetry yet pays homage to evolution of themes along the lenght of shrubbery. 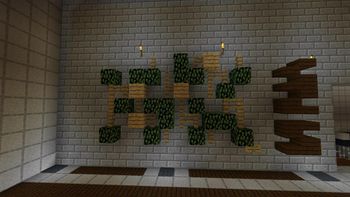 By standing on the stained terracotta, people could place offering to talk to the gods. 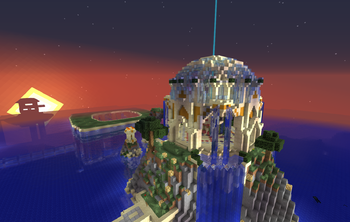