Argoth (officially Argoth Hold) is a city of benevolent communists on PvE rev7. This revision the city is trying grand canals instead of the traditional roads, which limits the speed of expanding. It is made up of 50*50 "islands" that residents build upon. It is located to the west and north of the East Nether portal and is on the 1700 loop. Once again Argoth has a military alliance with Pico and Seneca against the Brom driven town of Darco.

Argoth has all the amenities you'd expect of a major city: multiple public farms for whatever resource you're after, well-developed public transportation, and an excellent spleef stadium.

Direct rail connections are available to:

Additionally, Argoth has an extensive metro rail system for getting around the city quickly. Come visit, comrade!

Argoth was started in PvE r5, relatively late in the revision. It grew into a decently-sized town, but wasn't around long enough to become a true metropolis. Upon the start of PvE r6, Argoth was reborn as New Argoth, quickly growing into one of the largest, busiest cities on the map.

Unsurprisingly, a third incarnation of Argoth was started on the very first day of PvE r7. Rather than calling the city New New Argoth or something equally ridiculous, Argoth Hold was chosen as the name. 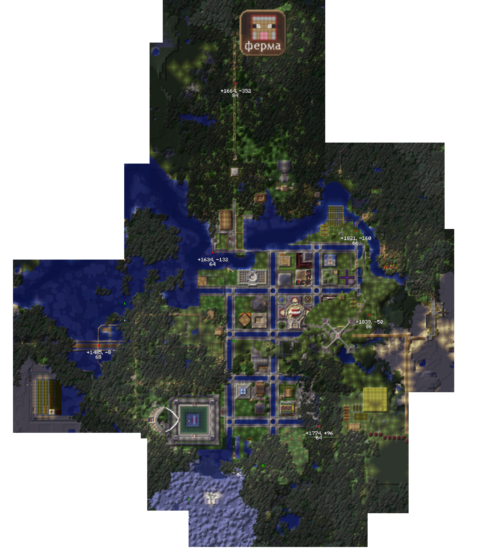