Tsitrin was a city on PVE8, intended as a direct successor to Topaz of PVE6, and headed by the former mayors of Topaz, Segasaturn95 and imwoood, as well as newcomer Merc_Rick. Amethyst, Segasaturn95's aborted project from the 7th revision was not considered a direct successor due to its abandoning of large city architecture and intent to stay small and unknown. Tsitrin, however, was designed for a medium-sized community, and aggressively pursued a modernist architecture style. With much higher standards than previous projects from Segasaturn95, the city attracted good talent from people like Merc_Rick and Amity07, which added to the artistic and technological flair of the town. Although work in the city came to a halt when a new revision was announced, the city exceeded all of the goals set by its founders, becoming a genuine community within the PVE server that will continue to build in future revisions.

The design of the town centered on a core of eight plots surrounded by streets that branched to provide room for more buildings. Originally the street design was rigid, but the limits of a rigid street design were easily reached in practice on the private test map, so the policy was abandoned. The plots were sized 15x15, with buildings sized 13x13, unless they were combined into larger plots, allowing for buildings of size 13x28, 28x28, etc. Roads were be built of stone slabs framed by stone brick stairs as curbs, and utilized the same "bar-lighting" pattern that Segasaturn95 originally used in Topaz (which was later removed by imwoood in favor of traditional lamp posts,) in which glass blocks at regular intervals top an inclosed box in the road that contains two torches. The shape is similar to a speed bump. Unlike Topaz, which placed the bars at the edges of plots, Tsitrin placed them at the center of the plot, greatly increasing lighting efficiency. The new pattern required only half as many bars as the old pattern in some cases.

Buildings were built mainly of stone-derived materials, excluding cobblestone, which was absolutely forbidden in the town. City hall used two. The city's wool farm was built on four plots, and was estimated to be capable of holding about 48 sheep. Two more plots were used as a public plaza, half of which was dedicated to the Topaz Memorial, a fountain with a glass copy of the Statue of Topaz, an ice sculpture from PVE6, built by imwoood. The other half held the Tsitrin Monument, a tall structure with redstone lamps on each side and controls at ground level for cascading light shows. An automatic lighting system was later devised. The Tsitrin Metro station will took up four plots and was built in a building originally designed as a spleef arena, since the arena's field was too small to be practical. Although it was originally intended to build the spleef arena outside town due to its massive size, the city leaders decided to expand the street plan to accommodate it instead. A public resource building used two plots and contained a cobble generator, the entrance to the public mine and an underground tree and wheat farm, a large number of public furnaces, storage for building materials, as well as other useful amenities. A three story embassy center used two plots and contained rooms for six cities' embassies, but this construction was rendered redundant by the UMC.. A public library used two plots and contained enchanting and brewing stations. A "Mob Drop Grinder" used one plot and was designed to spawn and then kill enemies using water flow and gravity with the intention of gathering bones from skeletons.

Two more buildings were added after the release of the "Tsitrin Test Map:" An elongated farm building that used two more plots and provided space for wheat, pumpkins, and watermelons. An L-shaped community center was added using three plots and wraped around the Mob Drop Grinder. The building provided a location for city events and public message boards, but was rarely used. 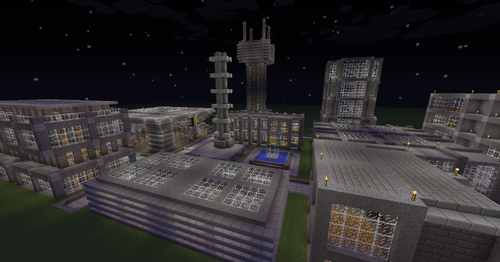 Segasaturn95's Tsitrin Test City, a model of things to come.

Segasaturn95 graduated from high school on the day of the map reset, and minecraft.net crashed, causing a delay of the city's founding to the second day of the new revision. Imwoood suggested the location at which the city was founded, at (1800, 1000). Because the early builders of the city had access to the previously released test map, construction of the core of the city was accomplished at an extraordinary pace, with all necessary city buildings completed within the first month, and tower projects being launched in early June. This high-speed contributed to Tsitrin's success, attracting about 20 residents by revision's end, while running a major surplus of building materials and rare resources. A rail tunnel was dug to New Lemuria, but communications could not be established with that city's leadership. A tunnel dug by Darco residents from Ravenholm connected Tsitrin to its neighbors to the south, and the metro station was later connected to they Y-70 rail for greater convenience. A major expansion of the city was underway in order to build a Tsitrin University, but enthusiasm for the project was dampened by the announcement of a new revision. The city was unable to create designs for the campus, and the large plots remained empty. Discussions for a successor to Tsitrin began in mid-July.